The Hillblock is considerably more stable than existing revetment blocks. Even after prolonged extreme test conditions in the Delta Wave Flume at Deltares the Hillblocks were still undamaged and in position. This was also the case after attempts to damage them artificially. The blocks work as a collective. The voids between them create water channels which remove pressure from under the stones. The tapered foot of the block causes rip-rap to be more and more firmly set.


The figure shows that the demonstrated stability of the Hillblocks exceeds the damage criteria, using the Dutch research method known as STEENTOETS. This applies to both a short-term and a long-term load. The results of the long-term stability tests were more than 30% higher than calculated in the STEENTOETS, and when expressed in terms of the pressure parameter Hs/(ΔD) even higher.

During test trials in the Deltagoot wave flume the dike Hillblocks were neither damaged nor dislodged. Since no damage occurred to the stone setting, it can be stated that the actual stability is higher than the value shown here. This means that a stone setting using Hillblocks results in a stability that meets the stability requirements of a pillar trim as calculated in the STEENTOETS. 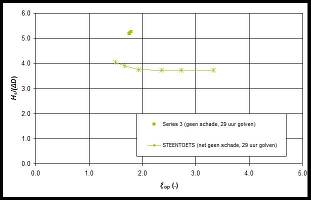