Each revetment reduces wave run-up on the slope. But due to rising sea levels and more frequent extreme weather events, higher tides with bigger waves are becoming more common. With high wave run-up, on traditional revetment, the hinterland is often inadequately protected against the driving force of the water.
Compared to traditional revetments the Hillblock has a much lower wave run-up. The default values for this are around 0.7 (30% wave reduction). By altering dike design and construction this can be lowered even further to 0.5 (50% wave reduction). This is comparable with wave run-up reduction values that can be achieved using a double layer of stone rubble.

In addition to the specifications, the change is in the design especially of the complete revetment. The voids absorb the water like a sponge. Pressure of the down coming wave is reduced in strength by the voids between the blocks and under the heads. The gaps between the heads act as regulator and reduce wave impact. The greater the openings, the greater the pressure in the channels, which in turn further reduces the wave run-up.
The corridors between blocks provide an enlarged flow area more than three times greater than the upper layer. The increased flow area helps reduce the wave run by increasing friction. Additional wave reduction is caused by the pressure needed to squeeze the water through the channels, and also causes turbulence.
The design of the layout ensures that the return flow of the wave is delayed, whereby energy is taken out of the back wave. This reduces the up-and-down energies, making converging waves steadier, quieter and smaller than with existing revetments. 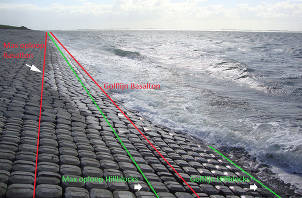